5. The Magician’s Nephew and The Voyage of the Dawn Treader – C S Lewis

If you’re only going to read some of the Chronicles of Narnia, make it these two. Tired of the Oh-So-Obvious Christian allegory of The Lion, the Witch and the Wardrobe? Replace it with the guinea-pig-related genuinely batshit crazy antics of The Magician’s Nephew and the swashbuckling (including talking mouse) of The Voyage of the Dawn Treader. Just avoid The Horse and His Boy. That’s a filler novel if ever I saw one!

This is just a classic. Also, if you haven’t seen the film with Robin Wright then go away and watch it now, because you are not yet a fully formed human. Just look out for those rodents…

Something a little bit more real-world gritty than the Earthsea books (which I also love, anyway). I guess it’s shading into sci-fi as well as fantasy, but I’m including it because I am the boss of my list. It’s great, but it will mess with your head. Prepare to never dream the same way again! 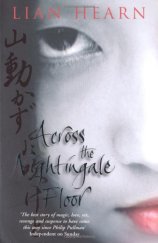 2. Across the Nightingale Floor – Lian Hearn

So I don’t know how far this counts as a fantasy, but it certainly read as a fantasy to me (there are people who can turn themselves invisible, and there’s the eponymous magical/mechanical floor). But it’s a pleasantly light touch of fantasy. “Magic” isn’t all over the place, but there are touches of it, along with a beautiful love story and plenty of intrigue. A lot of the Goodreads reviews complain of historical inaccuracy – I know nothing about Japanese history so this didn’t bother me, but I doubt that it would bother me in the slightest anyway. I think if anyone complained that my own novels did not historically reflect sixth-century Britain, I would tell them to grow up and develop a sense of fiction. Just by the by, also, Lian Hearn herself is a complete babe, and very lovely to overcome fangirly fans who shyly approach her via her Facebook page.

Fantasy for teens at its best, IMHO. Colfer combines magic, technology and a boy with a girl’s name into a series of unputdownable (apparently a real word) fantasy novels that just writing this makes me want to immediately go away and read again.

So there they all are, my top ten. Many are old favourites, but there’s nothing wrong with that. A good book is a friend that lasts forever.

Lavinia Collins is the author of Arthurian #1 bestselling fantasy romance The Warrior Queen. She regularly blogs here, and you can follow her on Twitter here.