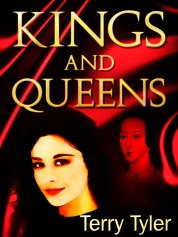 I really enjoyed Terry Tyler’s Kings and Queens. It’s kind of Tudor history fanfiction in conception (it transposes the events of the reign of Henry VIII into the late twentieth century), and I don’t say that to disparage it, only that that’s the best way to describe how the idea behind the book works. The thing I would say about Tyler’s book that struck me the most is that it’s just immense fun. All of the characters are broadly drawn with a real sense of verve and humour, and moving through the decades of the seventies, eighties and nineties, we’re treated to a huge amount of kitsch detail that – for me – was one of the great enjoyment factors of this book. And if I had to describe it in one word that would be it – kitsch. And kitsch in the best possible way.

There are a few things that niggled during the reading, but not enough to detract from the overall enjoyment. There were some annoying grammar errors, the one that stuck in my mind was the room of ‘sleeping cheesecloth and denim-clad bodies’; at first, I thought things had got very avant-garde and sleeping cheesecloth was about to make an appearance in a sort of off-the-wall way, and then I realised that there was just a hyphen AWOL. My inner pedant on the loose, I know. The
second thing was that (and this is probably more to do with me) I kept trying to match everything up to what I knew from history. And you really can. Just a temptation to the obsessional, I suppose! I also have to say that that cover does not do the book justice at all. I really enjoyed Tyler’s book and I would never ever ever have bought a Kindle book with a cover like that. (I know – shame on me for judging a book by its cover.)

But those things aside, if you’re out for some kooky fun and you like either your Tudor history or your family sagas, Tyler’s book is definitely worth a read. And Tyler does write very well, with a lightness of touch and an economy of style that makes her work immensely readable. I’d certainly recommend it to friends of mine who wanted to read something quirky and fun.

One thought on “Kings and Queens – Terry Tyler”