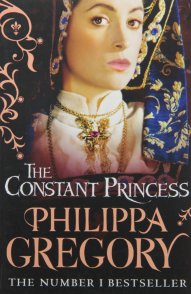 We don’t usually publish reviews of less than three stars, but I think Philippa Gregory is big enough to take this one.

I was very excited to read The Constant Princess – Katherine of Aragon is a fascinating figure, very often shoved into the long-suffering-wife-of-philandering-husband pigeonhole – and I was excited to read about her.

The long and short of it is, this does not reflect Gregory’s best work. Where The Other Boleyn Girl and The White Queen combined historical research with fluid storytelling, bold characters and lots of sexy fun, The Constant Princess is very heavy on exposition, and the only character that really emerges from the page is Katherine herself.

There are moments that sparkle: Katherine’s negotiations with her father-in-law twice over, Henry VII, and the opening, set in Al Andalus in Muslim Spain, where we see brief flashes of the fascinating Queen Isabella. But these wonderful moments are swamped under so much plot exhibition, so much information and historical knowledge dump, that it really flattens the story out.

I loved the details about late-medieval Spain. I loved the setting at the beginning, but as the book wore on, it got weighed down. Henry VIII, when he appeared, had none of the charisma Gregory wrote so well in The Other Boleyn Girl. This seemed to be largely because of the vision Gregory made regarding the famous case of whether or not Katherine and Henry’s marriage was legal. I found that her decision about it (which I won’t spoil) was not implausible, but the way it led was a bit of a stretch.

So, would I recommend this book? I think I would as a repository of fascinating information on Muslim Spain. As a historical novel, not so much. It’s a shame, because so much of Gregory’s writing is so great. I’m going to keep reading.