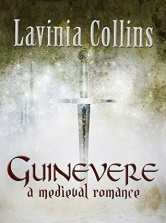 First, an admission. Lavinia Collins is a good friend of this blog. You may have read some of her guest posts here and on the Chapterhouse website, and the more eagle-eyed amongst you will have spotted her hiding in our header picture. That said, we felt that her books deserved our attention. Lavinia is the author of three fantasy/romance trilogies, each set in the world of King Arthur, each taking on a different perspective. This first trilogy is written from the point of view of Queen Guinevere, and tells the story of her marriage to Arthur and [SPOILER ALERT] her subsequent affair with Arthur’s greatest knight Sir Lancelot.

What separates Collins’ work from other interpretations of the King Arthur legend is her focus on female experience. As she argues here, in most modern versions the female characters are less well-developed, serving mostly to move the story along, and have little agency of their own. The characters of Morgan and Morgawse, Arthur’s half-sisters, are often elided together, while Guinevere herself often seems to have little personality to speak of. Collins’ books turn this narrative on its head, giving each of these characters their own take on the story. The Guinevere Trilogy itself contains lashings of drama and romance, and references pre-Christian religion and the occult. There is a sense of a country in turmoil, uncertain of how to join up its wild and varying factions, stuck between one world and another. This sense is reflected in the mercurial Guinevere, torn between her different lives, kind at one moment and cruel the next. Having been pulled from her native land to marry her father’s conqueror at the opening of the story, and having had to adapt to a new religion and new customs overnight, we see Guinevere as conflicted in all things from the outset.

Set in a world where women have little power or autonomy, it’s wonderful to read an Arthurian story with a woman at the centre. The major pull of the book is the idea of a woman’s struggle to define herself and live her own life in a world defined by male interests. If that sounds up your street, you should definitely check it out.

One thought on “The Guinevere Trilogy – Lavinia Collins”