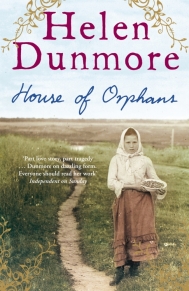 Early this June, when Helen Dunmore died at the age of just 64, I was reading her novel House of Orphans, published originally in 2006; it’s only now, nearly nine weeks later, I feel able to put into writing my thoughts on the book.

House of Orphans is set in Finland in 1901, at a time of political unrest and ferment, as the Finnish people struggled to resist the power of the Russian Empire and the ever-tightening grip of the Tsarist Finn leader Bobrikov. Eeva is the young daughter of a revolutionary and after being orphaned  she has been sent far from her home city of Helsinki to an orphanage to be trained for suitable domestic work. Local doctor, Thomas, a widower living alone, offers her work as his housekeeper. He is drawn to her unusual and thoughtful presence, and understands that she is no simple uneducated girl, but is intelligent, well-read and an independent thinker.

Thomas is a kind and unusual doctor, prepared to use both modern methods of medicine and old-fashioned remedies. His generosity leads him to help Eeva to leave his home and go back to Helsinki to return to her childhood friend, Lauri, and seek a different way of life, far away from the orphanage and domestic servitude. What she finds is love and constancy from Lauri, and from a new friend Magda, and bitter betrayal from Lauri’s new “comrade” in the political struggle, Sasha.

The harshness of Finnish winters is vividly described, along with the grim realities of young people living under a harsh regime and struggling to make ends meet. The kindness of Thomas shines through the pages, as we see him helping all his regular patients, as well as the orphans, living in their own strict regime, and Eeva. But Helen Dunmore has created a three-dimensional character here and we understand that he is not without fault, and that his own daughter feels betrayed by him. Eeva is a complex young woman, and I felt immense sympathy for her long struggles and relieved that she’d found the loyal support of Thomas, Lauri and Magda.

I felt that Dunmore had shown us a glimpse through a crack into lighted rooms in which they were all living and breathing. In some ways I wanted to know what happened next to the leading characters, so real had they become to me by the end of the book. But mostly I felt I’d been privileged to witness these scenes. That was enough, like looking at a famous painting and wondering about the real life of its subject.