Skip to content
HomeWhat She Never Told Me – Kate McQuaile 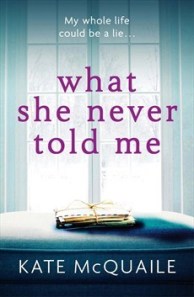 Louise Redmond is back in Ireland, where she was born and grew up until her mother, Marjorie Redmond, persuaded her to go to England to study music. She’s no brothers or sisters and she’s never known her father: all her mother’s told her about him is that he was an Englishman named David Prescott, who left Ireland before Louise was born. Her much-loved stepfather, Dermot, has already died, and now the death of her mother after a very short illness leaves poor Louise with many unanswered questions, trying to sort out who she really is and what to do with her life.

And she’s doubly bereft: Sandy, her husband of ten years, has left her. As Louise tries to make sense of everything, she’s haunted by shadows of memories from when she was a tiny child, memories she finds unsettling and threatening. She seeks help from her mother’s older brother, whom she barely knows, and accidentally stumbles upon what may well be the key to her life. But there are lots of twists and turns on the way, before she eventually discovers the truth about her parents and her family, and is able at last to achieve a greater peace with herself and come out of her mother’s shadow and into the light.

I read this over the course of two long train journeys, and was completely gripped. Kate McQuaile has created a rich variety of characters, who weave their through the complexities of the plot. I loved the descriptions of Louise’s journeys through different parts of Ireland, from the rich suburbs of Dublin to rural Kerry to find the family she never knew she had. She has the love and support of her oldest friend, Ursula, and her stepsister, Angela, both of whom are unfailingly kind and generous, but it’s a difficult journey which Louise is on and many truths and lies have to be uncovered along the way, both from other people to her and also from her to other people.

Should people ever tell lies or hide the truth in order to be kinder? These are tricky matters and many of the characters have got it wrong at times; sometimes their motives have been far less than kind, too, and more to do with self preservation. In the end even Louise has some truths which she understands are best not told, not just to protect herself but to be kind to other people. But finally she has achieved a greater peace than she could have dared to dream of less than a year before.

A terrific first novel – I strongly recommend it.