Skip to content
HomeToday will be Different – Maria Semple

If ever a book were crying out to be made into a film, this is it.* The action – and there’s lots of action – all takes place over the course of a single day in Seattle, where Eleanor, Joe and their son Timby have been living for nearly ten years.  Eleanor resolves at the outset that “Today will be different. Today I will be present.”

How she copes with her resolution and what happens when she tries to follow its idea through to reality is by turns hilarious and sad, uplifting and sorrowful. At nearly fifty years old her life to most people who know her now seems to be a bed of roses, with a highly successful career as an animator and a charming and caring surgeon husband. But she knows what her personal demons are and have been, and struggles to make sense of them and deal with everyday life. 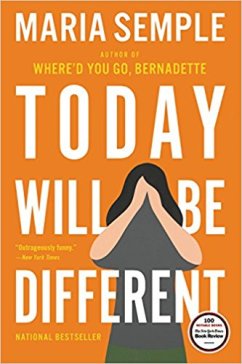 Along the way, we meet Alonzo (“my poet”) with whom Eleanor gets together weekly to discuss a different poem he’s asked her to learn and think about.

Then there’s Sydney Madsen: “for ten years I haven’t been able to shake her… the friend I can’t be mean enough to so she gets the message… I keep saying no, no, yet she still chases me”.

And Spencer Martell: he’s a former intern whom, over ten years previously, she had to let go after his eight weeks finished. But he’s now about to open a “solo show at the Seattle Art Museum”.

All these and many others are characters who made me laugh out loud. Maria Semple is witty and empathetic to her rich cast of characters, and has an artist’s eye for detail – a pen Eleanor is given is described by “The weight of it, the unlikeliness of its clownish color, the double-click of its top coming off and on in my hand.” All this combines into a hilarious novel which I devoured in a couple of long train journeys.

*It transpires that Today will be Different is actually being turned into an HBO series starring Julia Roberts. Hurrah!