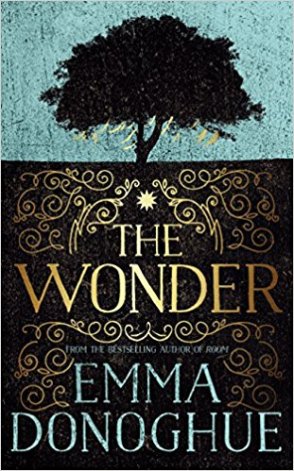 Yet another of my recent railway station purchases, I picked up The Wonder because I loved the film of Room, Emma Donoghue’s novel published in 2011, and hoped that this new novel would repeat the success of her earlier work.

This time Ms Donoghue has taken on an equally challenging subject matter. The novel is set in deepest rural Ireland at the time just after the potato famine. Mrs Wright, known as Lib to her family, is a Nightingale nurse, hired for two weeks private nursing work; on arrival, she finds that, along with another nurse (who is a nun, Sister Michael), she is to keep constant watch (morning, noon and night) on a girl who has for four months been refusing to eat, but who is being described as the Wonder.

Lib is told by the local doctor, McBrearty: “It’s a most unusual case… Anna O’Donnell claims – or, rather, her parents claim – that she hasn’t taken food since her eleventh birthday… No sustenance of any kind… She can’t take a thing but clear water.” And yet, “Anna walks around like any other girl… she hardly seems to have altered since April.”

Lib is immediately convinced that Anna must be a fraud, and that she will be able to work out within a very short time exactly how the girl is getting sustenance. Her family are poor and Anna is their only surviving child, her brother having died the previous year. Now Anna is being treated as a Wonder, and visitors are arriving determined to treat her as a miraculous presence, asking for her blessing and leaving offerings when they depart. During the two-week watch, things change, and it becomes clear to Lib and to a young journalist, William Byrne, sent by the Irish Times to write about Anna, that things have changed and the child is now not far off death. Has this resulted from the watch constantly being placed on her? Have the nurses unwittingly cut off the secret means by which she was getting food? The truth is shocking and, yes, Lib and Sister Michael have sadly caused things to come to this crisis point.

Emma Donoghue never fails to create credible rounded people in her works. Their worlds are as enclosed and trapped in The Wonder as they are in Room. Her descriptions of every bit of their surroundings, from the peaty landscape (into which poor Lib falls when trying to get some air and take a walk, only to discover how treacherous it can be) to the spirit house where Lib, Sister Michael and William Byrne are staying, and to the shabby home of the O’Donnells: “The cabin was in need of a fresh coat of whitewash; pitched thatch brooded over three small squares of glass. At the far end, a cow byre stooped under the same rood.” This family are clearly struggling to make ends meet and could surely do with the money which is being left by visitors come to see the miracle child in the iron safe by the door “for the poor”.

Lib and William see something in Anna which is rare and beautiful, brave and intense, loving and strong (even when she’s physically at her weakest), and in many ways they also see many of those same qualities in each other. Their story is moving and uplifting, and told with such tenderness that Ms Donoghue had me completely within her spell. Fabulous.