Big Little Lies was a birthday gift for which I am extremely grateful. I was totally hooked from start to end, and it’s a book that starts (very nearly) at the end of the story, then works back through past events to reveal what’s led to it.

The first character we meet is the gloriously named Mrs Patty Ponder (and her cat Marie Antoinette), observing the events at Pirriwee Public School with an unbiased eye from her house overlooking the schoolyard. And she lands us straight into the heart of events:

‘That doesn’t sound like a school trivia night… That sounds like a riot.’ She could hear people shouting. Angry hollers crashed through the quiet, cold night air… It was a strange sight…

Pirriwee’s trivia night is no ordinary school fundraiser but also a fancy dress occasion, with the women dressed as Audrey Hepburn and the men as Elvis. And some of the many incarnations of Elvis are punching and fighting, as Mrs Ponder hears the wail of approaching sirens and the screams from the school balcony.

Detective Sergeant Adrian Quinlan: Let me be clear. This is not a circus. This is a murder investigation.

And bang, the story changes from being a funny school tale, to something far more serious. The book immediately spools back to six months before trivia night and we meet Madeline, her old friend Celeste and their new friend Jane – all on the way to attend the kindergarten orientation day with their five-year-old children. Gradually these characters and their friends, partners, and children, and their stories are revealed to us, and we slowly understand what holds them together and what drives them apart, what motivates them, what secrets they have from each other, from their families and sometimes even from themselves, as they pack away what has made them as they are, and what drives them on, into tightly-sealed emotional boxes. 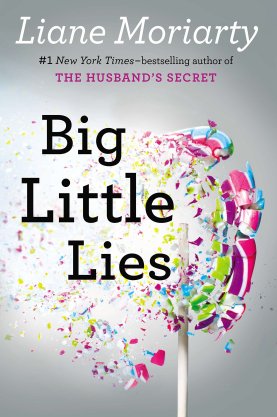 All the time Moriarty has such a light, deft touch that we don’t feel she’s ever judging her characters or expecting us to do so – she’s letting them reveal themselves to each other and to us all the time, bit by bit, as gradually the book comes back to the starting point of trivia night, and there they all are dressed as Audrey or Elvis. And in wearing these costumes, suddenly the disguises they’ve all been mentally wearing drop away, and they can be themselves. Throughout the book minor characters crop up from time to time acting a bit like a Greek chorus, separate impartial bystanders.

What’s so clever is the way the murder tale is told so lightly – it’s not a murder mystery where we are trying to work out whodunnit and we aren’t even told until page 429 which of the characters has died on trivia night, although by then I suspect that many readers will have been hoping they are correct in their suspicions. And I guess very few readers will have realised who has caused the death. The lies, secrets and misunderstandings come crashing down over the parents of Pirriwee School, harsh truths are revealed – but at the same time so are real kindnesses, greater understandings and genuine depths of friendship and love.

I missed the TV adaptation of this completely gripping novel. And having read the novel, I’m now undecided as to whether to tune in and watch it – for one thing, I really loved the very Australian nature of the book, whereas the adaptation relocates the tale to West Coast America. For now, I’m sticking with the book, as my visions of the characters are so strong I don’t want them to be overwritten just yet with anyone else’s. Hearty congratulations to Liane Moriarty for creating this glorious, funny, truthful and strong story, blending truths and lies in such a brilliant way, and dealing with such major issues as bullying and controlling behaviour and abuse in ways that make her readers appreciate how such situations can arise and how people can be trapped within them.  To quote the closing words:

and now her voice was loud and clear. ‘This can happen to anyone.’