Putney charts the tale of Daphne and Ralph; set mostly in and around her family home by the river in Putney, the scene shifts between the 1970s and the early days of the 21st century. The mutual fascination and attraction between the two grows over the course of long hot summers spent in the house with its garden that goes down to the Thames, the smells of London air richly mixing with those of the spectacular Greek-based home cooking done by Ellie, Daphne’s mother (her full Greek name – Eleftheria – means liberty), before shifting to the intense heat of a lengthy bus and ferry journey Daphne and Ralph make to Greece, where they have full sex together for the first time. Their tryst is cut short, however, when Daphne’s grandfather dies unexpectedly and she has to go straight to Athens for the funeral, forcing Ralph to go to his pregnant wife Nina, an old friend of Ellie’s. Ralph tells Daphne: 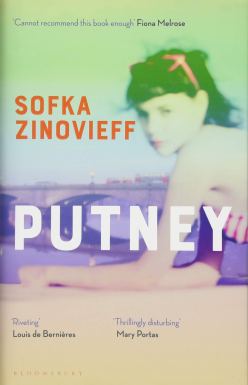 “We’re not bound by old-fashioned morality or small rules made by churches or by leaders who want to keep you under control. We’re free. You’re a free spirit.”

She paused, then nodded, believing him. Maybe she was free, even if it was unclear what that meant.

This is no regular heady romance, however; when they meet, Daphne is a child of nine, described by her father, novelist Edmund, to Ralph as:

“a free spirit. … Nine, you know, I think that might be the perfect age. A child at the height of her powers. Unafraid to be herself.”

Ralph, on the other hand, is then twenty-seven, a composer friend of her parents, and he becomes obsessed with the little girl, showering her with tiny gifts which he says must be kept secret. By the time she is twelve, he kisses her, tells her he loves her, but says:

“You’re the boss. I like it when you tell me what to do.” She knew him, trusted him. A friend. “A special friend,” was his expression.

Their relationship continues throughout the rest of Daphne’s school days, and Daphne’s understanding of it only changes when her own daughter, Liberty, reaches the age she was when she first fell under Ralph’s spell. She contacts her old school friend Jane who propels her into going to the police with her story – by this time, Ralph is a famous composer, lauded worldwide, and the ensuing scandal when he’s arrested will surely engulf and end his career and turn his fame to notoriety. The tale twists and turns, as we see Daphne’s struggles to come to grips with what happened to her as a child and how it changed her life afterwards. Jane’s tale, charting her relationships with Daphne and Ralph and her subsequent adult life, is also told, although this side of the book is, I feel, rather less successful; Jane remained to me a plot device, largely there to move the adult Daphne towards recounting her story to the police, whereas Daphne’s relationship with Liberty and her understanding of the nature of being a young pre-adolescent girl as she observes Liberty and her friend felt a far more genuine thing.

In the midst of the police investigations, Ralph goes to Edmund’s birthday party, where he faces up to Daphne, still unable to believe that he has done anything wrong. The narration shifts between Ralph, Daphne and Jane, all with strong individual voices. I had problems with the further revelations about Ralph towards the end of the novel, which changed the whole nature of the relationship between Daphne and Ralph, a relationship we’d seen largely through his eyes, describing his memories of it as he is in hospital undergoing chemotherapy; because of these revelations, I was left very uncertain as to how Ralph actually felt about Daphne. Up till that point he’s portrayed it as if it were a unique lightning strike in his life, rather than being one of a series of rumbling thunder storms throughout his adult life, part of a pattern of behaviour. Putney is a novel about abuse; but also about narrative, and who controls it. You, the reader, choose whose version you think is correct. Daphne’s, still seeing Ralph through rose-tinted lenses? Ralph’s, self-centred to the last? Or Jane’s, Daphne’s gawky teenage friend, who felt excluded and put aside? Read Putney and decide for yourself. I’m sure you’ll find it compelling reading.