If you are like me, then you’ll have only the vaguest and most pop-cultural knowledge of Jack the Ripper. It’s the “Jack the Ripper stalked the streets of Victorian London and murdered prostitutes”. It’s the leery, sensational “take” that glamorises violence, especially against women, and especially especially about women assumed to be sex workers. 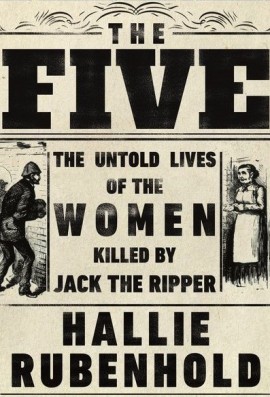 The Five isn’t about Jack the Ripper. It’s about the five “canonical” victims who are assumed to have been killed by him. It’s about women in Victorian society. It’s about poverty and deprivation and the terrifying ease with which people can slide from a comfortable life into desperation – especially women deemed to have lost their place in society by no longer fitting into the Victorian ideals of virgin, wife, mother. It’s about the profound suffering people were opened up to in a society where to be poor and desperate was to be deemed lazy and a moral failure. A society in which sleeping rough was often more attractive than the workhouse. Even though it’s about a time long past, it feels like a very timely book.

It goes through the victims one by one, tracing what we know of them from their parents to their ends. Although the book is clearly grounded in some very detailed scholarly research, it’s written in an engaging narrative manner, the facts fleshed out to give an imaginative and immersive picture of the lives of these women, their struggles. Rubenhold isn’t shy to speculate – and is clear when she is doing so – as to the likely feelings, motives and concerns of these women and those around them, and that gives the book a warm, human and sympathetic tone.

I couldn’t recommend this book more, not just as a fascinating deep-dive into Victorian society, but as an antidote to the kind of gawping, sensationalised representations of not just the Ripper and his murders but also general leeriness towards murder, and the fetishising of the psychology of the murderer. It’s a book that tells us directly about society then, but also indirectly about us now: we need reminding that there are more than just gory headlines in the past. (And before you cry, ‘That’s Not True!’, check out this piece about the Jack the Ripper Museum in London and the tasteless exhibits there.)