If, like me, you’re feeling that summer is an awfully long way off, now’s the time to turn to a book to make you feel better about the wait, and I thoroughly recommend turning to The Lido. Like Flora and her mother Ingrid in Claire Fuller’s Swimming Lessons, the two leading characters in The Lido, Rosemary, who is 86, and Kate, 60 years her junior, feel liberated and free when they are swimming. But whereas in Swimming Lessons the swimming is done in the open sea in Dorset, for Rosemary and Kate their liberating swims take place in Brixton Lido, a much-loved local venue. Rosemary has swum there for her entire life and it’s the key cornerstone in her whole being, as she’s watched the city she grew up in changing and shifting around her. So when it’s under threat of closure for redevelopment as part of a proposed luxury development called Paradise Living, she starts a campaign to prevent this. Kate is a young reporter working on the Brixton Chronicle who is assigned the task of covering the story. 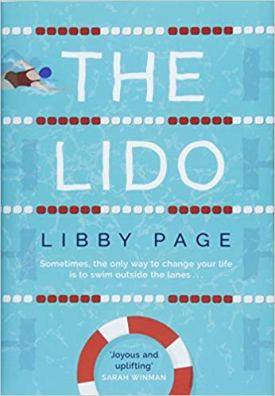 In this, her first published novel, Libby Page writes beautifully both about her characters – Rosemary and her late husband George in particular are an unusual central focus in modern fiction, working class and childless, and portrayed in tender detail – and about her setting. The descriptions of Brixton are vivid and capture a real, living place, chronicling vividly its changing nature, from Rosemary’s childhood in wartime right up to modern times. (George’s old greengrocers’ shop in Electric Avenue has become a trendy cocktail bar, for example.) Rosemary has many friends in the streets of her home town, so her shopping days are happy outings punctuated by long chats and treats; at home, however, she’s alone and missing George desperately.

Kate, on the other hand, is desperately shy, with no friends either at work or outside it, spending her evenings crying in her room in a house share.

She doesn’t tell anyone that often she feels like a sad, matted teddy bear you might see forgotten under a bench on the underground. She just wants someone to pick her up and take her home. … Kate’s loneliness sometimes feel like indigestion, at other times it is a dull echo at the back of her eyes or a weight that makes her limbs feel too heavy for her body.

Gradually Kate finds her way back to enjoying life – she has her eyes opened by Rosemary and her friends, and starts to become friends with them herself as she becomes aware of sides of Brixton she’d never previously known existed. She and Rosemary swim together and work together on a campaign to save the pool; she draws from Rosemary’s strength to become stronger herself, and when Rosemary is ill Kate steps in to find she is capable of doing so much more than she’d previously known – each of them needs the other in sometimes surprising ways. In addition, there’s a rich cast of other characters we come to know: members of Brixton’s eclectic community, from the teenage boy swimming at the Lido, to the gay couple in the bookshop, from the staff of the Brixton Chronicle to those working at the Lido, Rosemary’s old friends and colleagues. All play their part in this celebration of the triumph of hope, friendship and community over loneliness and feelings of loss.

Congratulations are due to Ms Page; I can’t wait for your next novel! Fingers crossed, too, for a film version of The Lido – there are two great lead roles here for both an older and a younger actor. Suggestions for casting?