Neve Connolly’s life is in the middle of being turned upside down. She and her husband Fletcher are stressed and worried about her daughter Mabel, who is about to start at university, and is clearly struggling with a major eating disorder. Amidst her worries about her family, Neve’s recently gone part-time at work, and to really complicate things she has been having an affair with her new boss, Saul:

In the last few weeks she had travelled into another country, where the rules no longer applied. She understood with absolute clarity that what she was doing was wrong. She was deceiving Fletcher but she wasn’t going to deceive herself.

Then early one morning she receives a text:

I’m free until midday. Come as soon as you can.

Hurrying to Saul’s flat, she finds he’s been murdered. Her reaction to this leads to a chain of events that spirals well out of her control, as she tries to keep up appearances at work and with her family and friends and colleagues. Her life, which is always busy, with Mabel and sons Rory and Connor to look after, and a constant whirl of social events with old friends, three of whom she’s worked with ever since they were in their late twenties and not long out of art school. They all get involved in the police investigation into Saul’s murder, with the detectives, particularly DCI Hitchings, turning up frequently and unexpectedly at the office, at Neve and Fletcher’s home, and even at Neve’s allotment. And as the investigation proceeds, Neve finds that she’s not the only one who’s been lying about relationships and events. The problem is, for Neve and for the police, who is still lying and who is telling the truth? Or who is telling any part of the truth? And who is covering up the truth to protect whom? 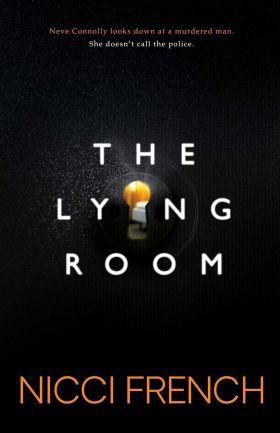 Nicci French novels at their best are compelling page-turners, and The Lying Room is one of the finest yet! Two of us read it in the space of just three days, both utterly gripped by the complex and twisting plot and by the struggle to make out who is telling the truth, and who is lying. Who should Neve trust? Should anyone trust Neve? When we compared notes afterwards, we each revealed moments when French had had us absolutely perplexed, trying to work out who the dangerous killer was, and as to how on earth the Connollys were going to survive the ordeal. We both felt there was definite room for a sequel, with tiny moments of doubt as to Neve and her family’s safety and ability to go forward with life.

A gripping read, with a rich cast of credible characters and vividly drawn scenes – we both thoroughly recommend it.