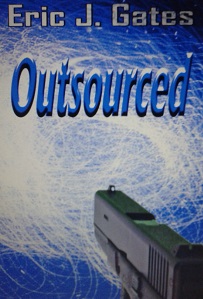 Fundamentally, this is a good story. Eric J Gates has written a strongly plotted book that quickly becomes an immersive page-turner.

Successful thriller writer Nic Stiles receives a mysterious package in the post, apparently from notorious mass-murderer Robert Polanski (I wouldn’t have picked that name either, but it’s not a big issue), and quickly becomes embroiled in an adventure involving shadowy government agencies, determined criminals, and a theoretical physicist. During the course of this, he is forced to team up with his literary rival, Phil Beasley, to get to the bottom of the mystery. One particularly successful element that helps to give Outsourced its unique character is the author’s use of magical elements in the story, something other crime and thriller writers tend to avoid. Gates proves that you can involve unusual and unexpected themes in a gritty and down-to-earth story, and the book is the better for it.

I did have some issues with the novel, however. At times, Outsourced speaks to the importance in indie publishing of hiring an experienced proofreader. Semicolons are overused and break the flow of some passages, and several words are unnecessarily capitalised. This is a shame, as the silly mistakes are distracting (at least, for someone sad like me), and detract from the pacy and gripping narrative.

Dialogue is often stilted, and acts too much as exposition throughout. Two entire chapters are centred around a conversation Stiles and Beasley have with physicist Claudia Chan, in which fairly well-known science trivia is explained as though it is ground-breaking research. On the off-chance that anyone reading hasn’t heard of Schrödinger’s Cat, there are other ways round it than having one of your main characters repeatedly exclaim ‘Tell him about the cat’ until your scientist character painstakingly explains the concept.

On this note, unnecessary detail sometimes stymies Gates’ voice, and he is often far too wordy. Sentences like ‘She spotted the person she was seeking, picking away at a keyboard with his left hand, as he simultaneously manipulated a wireless trackpad with his right in a display of cerebral bilocation which would be beyond her own, above average, coordination skills’ abound. In fact, the very first sentence of the novel nearly put me off from the beginning, and it is a testament to Gates’ tight plotting that I stuck with it.

Overall, I enjoyed this book, though I did feel it was badly let down by some unfortunate errors, and some dialogue and sentences that would have been better left out. This is one of the drawbacks to indie publishing, of course, and serves as a reminder of why good proofreading and copy-editing are vital!