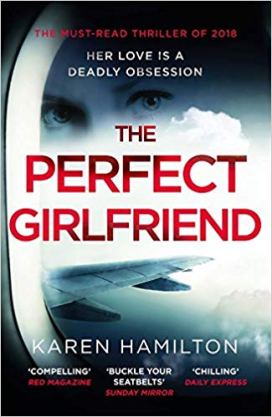 The Perfect Girlfriend offers a very enticing proposition – a romance-tale as old as time, if you will. A crazed ex-girlfriend obsessively stalking her ideal man, with a dash of high-skies peril thrown in as love-obsessive and love-object are trapped together at 31,000 feet. I was keen to give it a read.

The story begins as Juliette – as our protagonist is sometimes known – begins her campaign to win back her ex Nate to whom she was – she earnestly tells us – the perfect girlfriend. Nate is an airline pilot, and of course Juliette signs up to be a steward on his airline, and begins her campaign to get him back through various increasingly outlandish schemes. This is all framed by the childhood trauma that opens the book: namely, her little brother’s drowning while under her supervision.

It’s an enticing genre-fiction scenario, and I was excited to sit down and read the book and see how it played out. There was a lot to recommend it – Karen Hamilton’s own background as an air steward was evident in the level of detail and realism, and Juliette was enjoyably unhinged as a narrator, which was great fun to read.

But those strong elements were, strangely enough, what made this book a less-than-satisfying read for me. A lot of the in-cabin realism grew dominated by admin, and the promise of threat in a locked-in confrontation or power play between pilot and steward never came to pass, and felt like a gun that was loaded and not fired. It felt as if Hamilton was so focused on the detailed realism of life in the air that she did not make enough of the dramatic potential of the situation, and it became background detail rather than heart-thumping drama.

Likewise, Juliette’s unhinged behaviour was always turned right up to eleven, whether she was dyeing her hair the same colour as her new friend and breaking into her house, or conducting some extremely-fast-escalating machinations regarding her ex-boyfriend. For a book called The Perfect Girlfriend, I expected to get more detail on how she had made herself ‘the perfect girlfriend’ in her relationship’s early stages. I couldn’t help thinking about Gone Girl, and that book’s complex and moving critique of the ‘cool girl’ persona. I guess Juliette wears a short dress and cooks a curry once, but apart from this she seems like the worst girlfriend imaginable. I suppose there is meant to be some irony in the title, but we never really see her trying to be perfect. We only see her being a psycho.

So although there was a lot I liked about The Perfect Girlfriend, it left me feeling that some opportunities had been missed. I wanted drama in the skies, I wanted a searing deconstruction of the pressure on women to be ‘perfect’, and though I got a perfectly serviceable thriller, I was left wanting more.

Published in hardback in 2014, this first novel written by Clare Mackintosh has now sold over a million copies and won the Crime Novel of the Year award last year. Clare has plenty of experience of crime investigations, having worked in the police for twelve years, including time in the CID, so the police attempts to solve the shocking event that happens in the opening pages ring utterly true, including the inevitable worries about understaffing and overtime costs, both of which naturally affect the course of the police investigation which follows.

Initially, I was confused between the voice of the first person narrative sections – a young woman whose son has died and who is fleeing her past – and the third person narrative sections following the police officers’ working to get justice for a dead boy and his grieving mother. Then suddenly the novel really clicked in and I read it compulsively, adjusting between the different voices and shifting of times back and forth to build a horrifying and compelling picture of the events leading up to and following the horror of the prologue. By the final chapters I felt as if I were living alongside the terrified young woman, too scared to breathe, needing to run but petrified of moving an inch.

The plot twists are unexpected and shocking, and at the same time utterly plausible. I sympathised with the police struggling to keep going through their heavy workload, while trying also to maintain a grip on their family lives.

Read this: but I strongly recommend not too late at night if you’re at all of a nervous disposition.

I picked up Sabine Durrant’s Lie With Me in Marylebone station, because I wanted something to read on a long train journey. It was late, and I figured I would read a couple of chapters and then watch something I’d downloaded for the journey. Boy was I mistaken.

Lie With Me tells the story of Paul – playboy, exaggerator, sleazy philanderer and, most of all, liar. Following some literary success in his youth, Paul now flat-sits for more successful friends, passes the flat off as his own, sleeps with much younger women, and lives in fear of ending up living with his mother. When the opportunity to sponge off a widowed woman his own age presents itself, Paul takes up with the apparently vulnerable (but unsettlingly cold) Alice and blags his way on a family holiday to Greece. The rest – I shall not spoil! 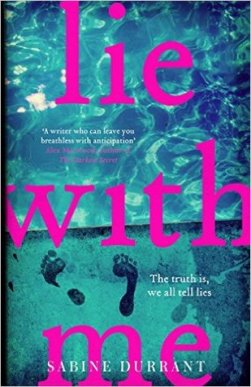 The great strength of Lie With Me is in its characters: Paul is the narrator we (I?) love to hate – always staring down women’s tops, and at the bums of his girlfriend’s teenage daughter and her friend, always casually putting other people’s things in his pocket; Alice is somehow both vulnerable and unavailable, both worldly and absent.

The narrative is perfectly paced, and we get just enough to guess at the twist before it is revealed, but not so much that we feel as if we know what it is going to be too early on. I read the book in less than twenty-four hours, and I would be surprised if many other readers didn’t – like me – struggle to put it down.

I would strongly recommend this to any readers!

Every month, our friend Lavinia Collins is going to share with you a book she’s read and recommends.

I couldn’t tell how much I was enjoying Diane Dickson’s The Grave until I lost my Kindle charger and ran out of battery 60% of the way through, and felt as though I was suffering from a grave emergency. The Grave is a fast-paced gritty crime thriller. I’m actually not a regular crime fiction reader, and I stumbled across Dickson’s book because we are published by the same publishing house, and I thought I’d give it a try.

We open with a body being disposed of, and we (or I!) think we know what’s going to happen, but the story unfolds with many twists and surprises. The story follows Samuel, a secretive man with a dark past, and Sylvie, a fragile young woman with a difficult history. Samuel lives in the forest, so for a while this story made me think of that Dolly Parton song where she falls in love with a weird forest man called Joshua (listen to it now), but that’s by-the-by. Samuel’s savvy, together and strong, and Sylvie’s constantly in tears. But (and I don’t want to say too much about this) the story and the characters are deeper than that: Samuel is also vulnerable; Sylvie is also strong. And what feels at the beginning as if it could turn into a male-orientated crime story with a female accessory, quickly diverts from that and offers so much more.

You’ll love this book if:
– You like mystery/crime fiction with a twist
– You’re looking for something gritty
– You’d like typical crime grit but with some decent female characters for a change

You might want to avoid this book if:
– You’re sensitive to graphic violence and graphic sexual violence

When the author sent through the review copy of this book, he said, ‘I hope you enjoy it.’

Enjoy’ is the wrong word. In fact, I don’t think I’ve ever been more upset or unsettled by a novel. Grant Nicol tells the story of Ylfa, a free-spirited but directionless young woman living on her own in Reykjavik. When a young man is horribly murdered on her father’s farm she is determined to unravel the mystery. However, she isn’t prepared for what follows. What should have been an isolated incident spins into a dark and crooked tale involving kidnapping, arson and rape.

At its heart, On a Small Island is about our inability to escape our past. The setting in Iceland is perfect, and Nicol gives a wonderful sense of the claustrophobia of a small community. The denouement is unfortunately handled a little too quickly, but the book remains gripping throughout.

I’m not sure I can say all that much more without giving too much away. Read this book. Just don’t expect to sleep easily for the next week or so.

Fundamentally, this is a good story. Eric J Gates has written a strongly plotted book that quickly becomes an immersive page-turner.

Successful thriller writer Nic Stiles receives a mysterious package in the post, apparently from notorious mass-murderer Robert Polanski (I wouldn’t have picked that name either, but it’s not a big issue), and quickly becomes embroiled in an adventure involving shadowy government agencies, determined criminals, and a theoretical physicist. During the course of this, he is forced to team up with his literary rival, Phil Beasley, to get to the bottom of the mystery. One particularly successful element that helps to give Outsourced its unique character is the author’s use of magical elements in the story, something other crime and thriller writers tend to avoid. Gates proves that you can involve unusual and unexpected themes in a gritty and down-to-earth story, and the book is the better for it.

I did have some issues with the novel, however. At times, Outsourced speaks to the importance in indie publishing of hiring an experienced proofreader. Semicolons are overused and break the flow of some passages, and several words are unnecessarily capitalised. This is a shame, as the silly mistakes are distracting (at least, for someone sad like me), and detract from the pacy and gripping narrative.

Dialogue is often stilted, and acts too much as exposition throughout. Two entire chapters are centred around a conversation Stiles and Beasley have with physicist Claudia Chan, in which fairly well-known science trivia is explained as though it is ground-breaking research. On the off-chance that anyone reading hasn’t heard of Schrödinger’s Cat, there are other ways round it than having one of your main characters repeatedly exclaim ‘Tell him about the cat’ until your scientist character painstakingly explains the concept.

On this note, unnecessary detail sometimes stymies Gates’ voice, and he is often far too wordy. Sentences like ‘She spotted the person she was seeking, picking away at a keyboard with his left hand, as he simultaneously manipulated a wireless trackpad with his right in a display of cerebral bilocation which would be beyond her own, above average, coordination skills’ abound. In fact, the very first sentence of the novel nearly put me off from the beginning, and it is a testament to Gates’ tight plotting that I stuck with it.

Overall, I enjoyed this book, though I did feel it was badly let down by some unfortunate errors, and some dialogue and sentences that would have been better left out. This is one of the drawbacks to indie publishing, of course, and serves as a reminder of why good proofreading and copy-editing are vital!