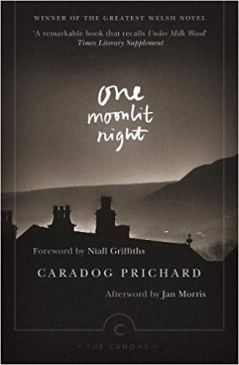 This was not a book I would have come across on my own. Originally written in Welsh, and chosen by my local book club, One Moonlit Night was a strange, fantastic revelation. Gothic and – in places – hallucinogenic, it moves in fits and starts through time, describing life in a small Welsh mining village, all under the shadow of a series of deaths, midnight wanderings, madness, and people who disappear to an asylum never to come back. The rituals of the Church and institutional religion intersperse with small-town rural superstition – the devil in a black lake, a lady who sleeps along the slope of Snowdown.

The novel is remarkable for its early-twentieth-century compassion for mental illness – and not just in the narrative. It shows a community that feels sympathy and compassion for those with poor mental health. The blurb of my copy compared it to Under Milk Wood, but the comparison seems lazy and based on the fact they both describe Welsh small-town life – One Moonlit Night doesn’t have the whimsy or wild absurdity of Under Milk Wood. It’s dark and troubling, ambiguous and unsettling. It’s dreamlike, sure, but in an entirely different way.

I was informed I was wrong to do so by a native Welsh-speaker at my book club, but I liked the style of the translation. The style was childlike in places, and grew with the narrator, but the naivety of the voice wasn’t twee or cute – it added to the unsettling ambience throughout, especially in places where it was used to lose the reader somewhere between reality and fantasy. I would strongly recommend this unusual, unsettling little book to any reader!